For almost 150 years, the Topsfield Town Library has sought to be the cultural and informational resource for the community.

The Topsfield Town Library can trace its origins to the first library that the Topsfield Library Society, founded in 1794. Formed by 80 residents who paid 20 shillings each, the first 68 volumes were purchased. The books were stored at the home of the current librarian, usually the pastor of the church or a physician. Books were circulated the last Monday of every month. The original book case and its volumes are currently on display in the periodical room of the Library (see photograph on right).

In 1874 the town realized that public need could be served by establishing a free town library. Several established groups added their collections to the 1794 book case and money was raised to purchase additional volumes. In 1875, the Library found its home in the new town hall and was open Saturdays only.

In 1912, space issues in the library led the town to purchase a parcel of land at South Common Street. A young Boston architect, Harold Field Kellogg, drew up plans for a library to be built at the site.

Donations from George L. Gould and David Pingree (made in 1921 and 1932 respectively) were crucial in getting construction underway. The town also secured funding under the 1933 National Recovery Act (WPA). Once approval for the building was in place, and minor revisions made to Kellogg’s 1912 plans, the Library was built. The new building opened to the public on February 16, 1935. The building cost $36,593.

Harold Field Kellogg (1884-1964) studied architecture at Harvard University and then attended the Ecole des Beaux Arts in Paris from 1906 to 1910. Upon his return to the United States, he trained with several prominent Boston architectural firms, including Shepley, Rutan, & Coolidge, Kilham & Hopkins, and Peabody & Stearns.

Mr. Kellogg was the architect for the classic and beautiful Longwood Towers in Brookline, Massachusetts. Sometime in the 1920s he converted to modernist thinking as evidenced in his 1930 design of the massive Public Service Building on Batterymarch Street. Mr. Kellogg’s other principal works in the boston area included alterations to the Cathedral in Boston in 1946, construction of the South End’s Cathedral housing project in 1950, and numerous hospitals throughout the state. he also designed the familiar Hatch Shell on the Esplanade. Sometime later, he moved to California and continued his work there as an associate architect of the Forest Memorial Park in Glendale until his death at 79.

Shortly after Mr. Kellogg died in 1965, his son, also named Harold, visited the Topsfield Library with his wife. He recounted how, in 1912, the young Boston architect and friend of trustee Franklin Balch, drew up the original plans for the library. It was many years before the hoped-for building was erected. The twenty-year old plans were brought out again in the early 30s and were followed with only minor changed.

Mr. Kellogg painted the eleven murals depicting the early settlement of Topsfield which adorn the lobby of the Library. His son remembers coming to the job with his father when he was 10 or 11 years old. He noted that the bas relief of the three Muses, now over the doorway of the meeting room, was designed and executed by his father who also personally applied the gold leaf with surrounds the Muses. The son felt sure that his mother posed for the Muses as she did for many of his father’s works. The murals and Muses were cleaned and restored during the renovation and expansion of the Library courtesy of the Gould Fund. Source

The town’s population continued to grow, and needs changed. The number of new materials available for libraries also increased. By 1966, a number of changes were necessary, including moving the children’s room to the basement to make room for more materials. Space was shrinking while demand was increasing. At this time, the Friends of the Library were formed with the mission of supplementing Library services and programs.

In 1988, the Library received surprising news. The will of George L. Gould, an original contributor to the 1935 building, was revealed. Mr. Gould had drawn up his will in 1921, but his bequest to the library was not revealed until his last living heir, Rosamond Gould Childs, died at 100 years of age. Library Trustees were notified that the bequest was significant. Gould’s will expressed “his strong conviction that the Topsfield Town Library should not only be a repository of the printed word but also a cultural center promoting the aesthetic in the lives of Topsfield residents.”

Topsfield’s population continued to increase and the building was not ADA compliant. It was decided an addition to the 1935 building was needed. The addition was funded by the Gould Trust, a grant from the Commonwealth of Massachusetts, & the people of Topsfield. Groundbreaking day came in November 1997. Many residents helped staff move 7,000 paper bags of books to and from the Library’s temporary location. The Library reopened on February 27, 1999 amid much celebration.

The George L. Gould Fund continues to support the library mission to this day by providing funding for all lending materials as well as programs, concerts, artwork and more.

Timeline of the Topsfield Town Library 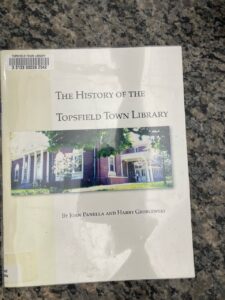 Joan Panella and Harry Groblewski’s The History of the Topsfield Town Library highlights the history of the library from its beginnings in 1794 through the 1997-1999 addition. The authors, who were former Trustees of the Library, dedicated the book to “all of the volunteers who have faithfully served the library…from its beginning to the present day.”

“The story of the library reflects in many ways that character and growth of the town itself…one cannot pass by the [1794 bookcase] without thinking of the enormity of change that has occurred in a little over 200 years and about the contributions of so many townspeople who…have helped bring to fruition the present library as a cultural center for the education, enrichment and enjoyment of the Town of Topsfield.”

View some photographs from our history!